The Perfect Chocolate Chip Cookie – For Father’s Day this year, Noelle and I decided that we would make Michael his favourite chocolate chip cookies.  I actually had no idea (after almost 12 years) that he loved chocolate chip cookies so much but recently, after all the cookies disappeared within about a day of making my last batch, he confessed his weakness to me. I’m more of a savoury food person myself but I’ve got to say that these chocolate chip cookies are really quite divine.  What makes them so great… they are a little bit crunchy and yet soft and chewy all at the same time.  They also have a nice saltiness to them thanks to the kosher salt in this recipe.  Give them a try and I think you’ll agree that they’re pretty close to perfect. 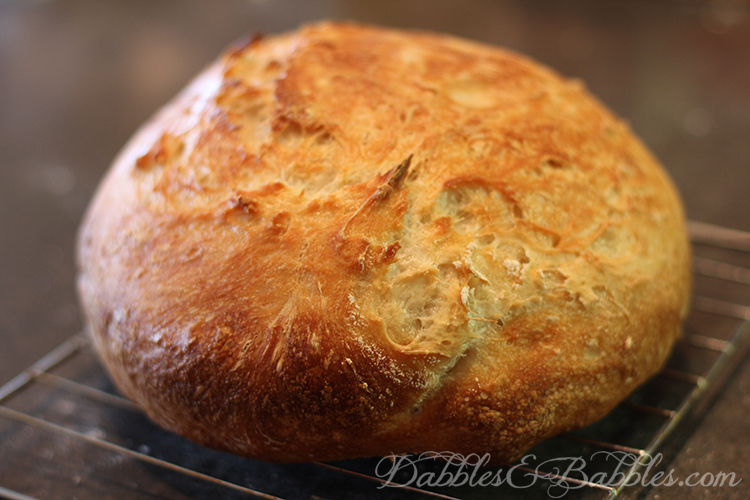 I’m just going to say it… I love bread!  Which means I never keep it in my house.  If I ever have beautiful artisan bread in my house, it rarely lasts longer than an entire day – yes, I’m ashamed to say that means I can eat an entire loaf in a day.

My talented friend Diane is an incredible baker.  She’s always bringing in her stunning loaves of bread into work and taunts the entire office with that warm, rich and delightful fresh baked smell.  Myself, I usually don’t have much luck with baking but I thought I’d get some advice from Diane about an easy bread that I may have some success with.  Diane suggested a no-knead bread so I came home and looked up some recipes online until I found this recipe on Frugal Living NW. Overall I thought the recipe was great but personally,  I like something with a bit more flavour so I added asiago cheese, garlic, rosemary and a touch of oregano to the recipe the next time I made it and it was to die for.  Now I make this whenever I have at least a days notice that we’re having company. This also makes a wonderful gift to take when attending dinner parties – always a hit!