Before and after frosted glass effect.

DIY Frosted Glass Window Tutorial – It had to be a man (or a very secure and tolerant woman) who had the bright idea of putting a leaded glass door into the en suite BATHROOM.   Yes, I said it… a door with windows in a bathroom.  Seriously, what were they thinking – a gorgeous view of the bathtub, shower and toilet? We didn’t noticed this strange anomaly in our house until after we’d purchased it and spent our first night living here.  I was the one to discover this design disaster and was in complete shock.  My husband thought it was great of course, as most men would.  Now after living here for over a year I’m done with it… I want privacy!

This week, my husband’s away on a business trip so I thought it would be a great opportunity to fix this problem and surprise him when he comes home.  I went to our local Home Depot and bought a 36 x 72″ piece of Artscape Window Film.  There were about 20 designs to chose from but I wanted something simple so I picked the Etched Glass design. This film is just a static cling, it’s not sticky so it’s ridiculously easy to remove if and when you need to do so. Here’s how I created the frosted glass effect (it took about an hour or so to complete this project and yes, I was too lazy to install the film in every single pane, hence the clear glass on the top and bottom): 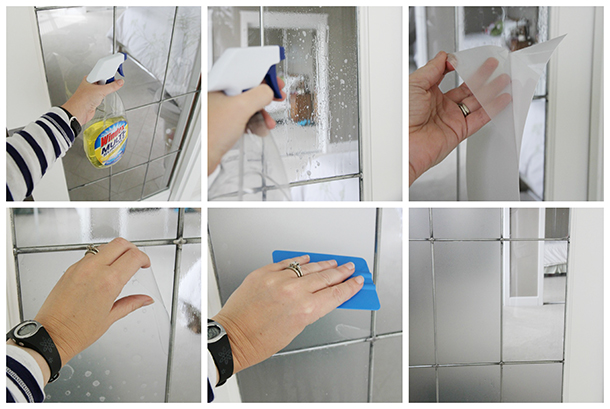 How to install window film.