Campfire Toasted Cinnamon Rolls – In my last post, I mentioned that our family recently had our inaugural camping trip of the year. We went with some friends and had so much fun camping in the Pacific Northwest rain forest along the coast of Vancouver Island (see last post for some photos of our trip). I love trying new camping recipes and this time I’d seen some orange/cinnamon rolls cooked in orange peels over a fire on Pinterest that looked intriguing. Loved the idea but my daughter doesn’t like oranges at all so I had to take another route…what about simply cooking them on a roasting stick? I really wasn’t sure it was going to work and honestly I kind of forgot about them until our last camping night. Once I remembered, I asked the kids if they had any interest in trying a roasted cinnamon bun experiment and they were all over it.

We cracked open a can of Pillsbury Cinnamon Rolls and carefully put them on some roasting sticks. We tried a few different methods but in the end the best way was to simply insert the roll (as is straight out out of the can) on a small double pronged roasting fork. We tried on a single prong but they kept twisting and almost falling off – too much stress. We also discovered that you needed to keep turning them to make sure they were cooked all over, especially in the center. You definitely want some hot, glowing embers to cook the cinnamon rolls, a roaring fire wouldn’t work well at all. As a final surprise, I discovered that these particular cinnamon rolls came with a little container of icing…truly the icing on the cake (or cinnamon roll). Sweet, fluffy, warm and toasty – why does camping food always seem to taste extra delicious! So in the end, it turned out that our campfire cinnamon rolls experiment was a huge success and I would highly recommend it. 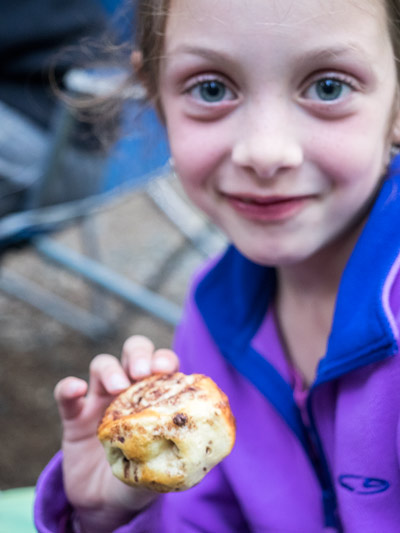 The best toasted marshmallows ever!

Bailey’s Dipped Toasted Marshmallows – How about a little something for the adults for a change.  A couple of weeks ago we started our annual summer long camping.  We keep our trailer at the beach for the summer – only about a 15 minute drive from our house. We’re there for most of the summer, until school starts back up. Most nights, as the tip of Mt. Baker turns from white to peachy-pink,  we settle in with a toasty little campfire to keep us warm.  A few years back we discovered Bailey’s marshmallows – all I can say is be prepared, once you’ve had toasted marshmallows with Bailey’s you’ll be ruined for all other marshmallows from that point forward.

Making this is about as simple as it gets. Toast your marshmallow over hot coals, then dip the warm marshmallow into a cup of Bailey’s.  It can be a bit gooey and drippy so be prepared to bust out the wet-wipes.

Be warned… this is highly addictive!