Ultimate Rice Krispie Squares Recipe – Who doesn’t love a good old fashion rice krispie square, but what if we could kick it up a notch or ten.  Meet the Ultimate Rice Krispie Square. I have a wonderful story about how I came to have this recipe that I absolutely must share before I pass it along – please indulge me for a moment if you don’t mind. About a month ago I bought a new camera. I was so excited when the camera arrived, I carried it with me everywhere I went including picking up my daughter from school. One afternoon on the way to school I took a photo of a statue that resides on a residential property right by Noelle’s school. I stopped to take some photos of this lovely angel and when I got home and took a look I really feel in love with the angel photo. The angel statue belongs to a lovely older couple who are always out saying hi to all the children as they go to and come home from school. The gentleman is lovingly called the “candyman” because he’s always giving treats to all the kids who pass by his house.  I started thinking about the angel photo I had and decided it would be nice to blow up the photo, get it framed and leave on the couples doorstep.  I was mentioning this to Noelle and she asked if she could make a card to go with the photo and I agreed with the condition that she doesn’t include her name – this was to be a random act of kindness. Without us chatting about it she made a beautiful card that made me very proud (see photo of angel and card at bottom of post). The next day we snuck up to their front porch and left the photo/card at their front door – victory, we managed to not get caught. After school I went to pick up Noelle and admittedly I had totally forgotten about the photo/card when I saw the “candyman” out stopping everyone who walked by to show them the card and ask if anyone knew who left it. I managed to sneak past the congregation of parents and went to grab Noelle from school. As we walked back he was still talking about the card and I heard him say that he was going to get the card framed too. Noelle managed to walk past the group without even looking in the direction of the “candyman” – quite a challenge for a seven-year old I’ll tell you. Anyway, that was pretty much the end of the story… until about a week or so later, we had stayed late at school and by the time we left school everyone else had gone home. We walked past the “candyman” and then all the sudden he bellowed, “you’re Noelle aren’t you!”  Noelle stopped dead in her tracks and looked at me like “what am I supposed to do now mom” and I nodded to her that it was OK to chat with him. Noelle turned around and acknowledged that yes, she was Noelle. It turns out that someone had squealed on us (I still have no idea who it was and there were only a handful of people who knew about the story). The candyman said “Noelle, I’ve been looking for you everywhere. I’m Henry and you made me a very happy man – please come in the house and see where we’ve hung your photo and meet my wife Joan.”  Well, that was it, since then we’ve become great friends with Henry and Joan and Noelle has managed to burrow into their lives (as she often does with people). On our second time at their house Henry offered his special rice krispies squares to us and I told him they were the best I’ve ever had.  He and Joan kindly shared their recipe that they’ve been using for many years. Today, in their honour I share this recipe with you too! 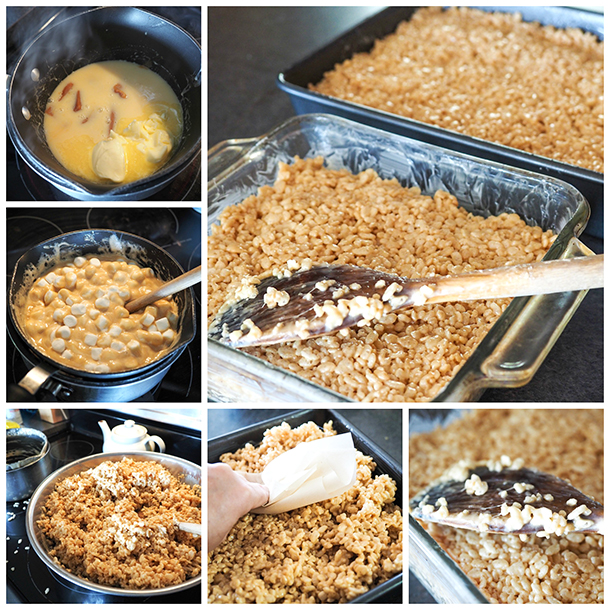